Shore Hardness and Durometer (aka, Duro) are terms you’ll see often on our website. In this guide, we explain what they mean and where common items sit on these scales that measure a materials hardness.

Shore Hardness and Durometer (aka, Duro) are terms you’ll see often on our website. In this guide, we explain what they mean and where common items sit on these scales that measure a materials hardness. Shore Hardness and Durometer (aka, Duro) are terms you’ll see often on our website. They are most commonly used to describe the hardness of rubber materials but they are also used with many other product types including adhesives, sealants, fibre sheets and sponge.

In this post, we’ll explain what these terms mean and introduce a basic reference chart which shows the typical hardness of some common items.

What is Shore Hardness and Durometer.

Shore Hardness is a method of measuring the hardness of a material. This is done using a device known as a Shore Durometer or Shore Hardness Tester.

In basic terms, these work by measuring the resistance the material provides as a load is applied to them. The result is provided as a number which is recorded as that materials shore hardness.

As with most things in the engineering world, there’s different units used for recording the results of these tests. These are called Shore Hardness Scales.

There’s actually 12 total scales although, if we’re being honest, we’ve literally never come across most of them in all our years of experience. The main ones we see every day are Shore A, Shore D and Shore 00.

The Shore A Durometer Scale.

The Differences Between the Shore Hardness Scales.

The scales overlap but they definitely do not mean the same thing. Therefore, it is important to know which scale you are working from.

If you see a material listed as 60 Duro and there’s no mention of which scale it corresponds to, it could resemble a rubber band (Shore 00), car tire (Shore A) or a trolley wheel (Shore D).

On our website, though we may sometimes refer to things as 60 Duro, you will find which scale this is measured in in the specifications for the product.

Over the years, one of the more common questions we get about things like our rubber strip is “how hard is it”. That’s always been tricky to answer over the phone or via email. It’s a little bit like trying to describe how blue something is with just words.

One way we’ve sought to solve the problem is by putting together our Shore Hardness Scale Chart which is included below (and can be downloaded here).

As you can see, this includes various examples at popular points on each of the hardness scales and shows how the 3 main scales we used intersect (e.g. 90 Shore 00 Durometer is about the same as 65 Shore A Duro).

This scale shouldn’t be mistaken for a precise engineering document, but it’s been a useful tool in helping people visualise how hard some of our silicones, rubber sheet, sponge tape and epoxy resins actually are. 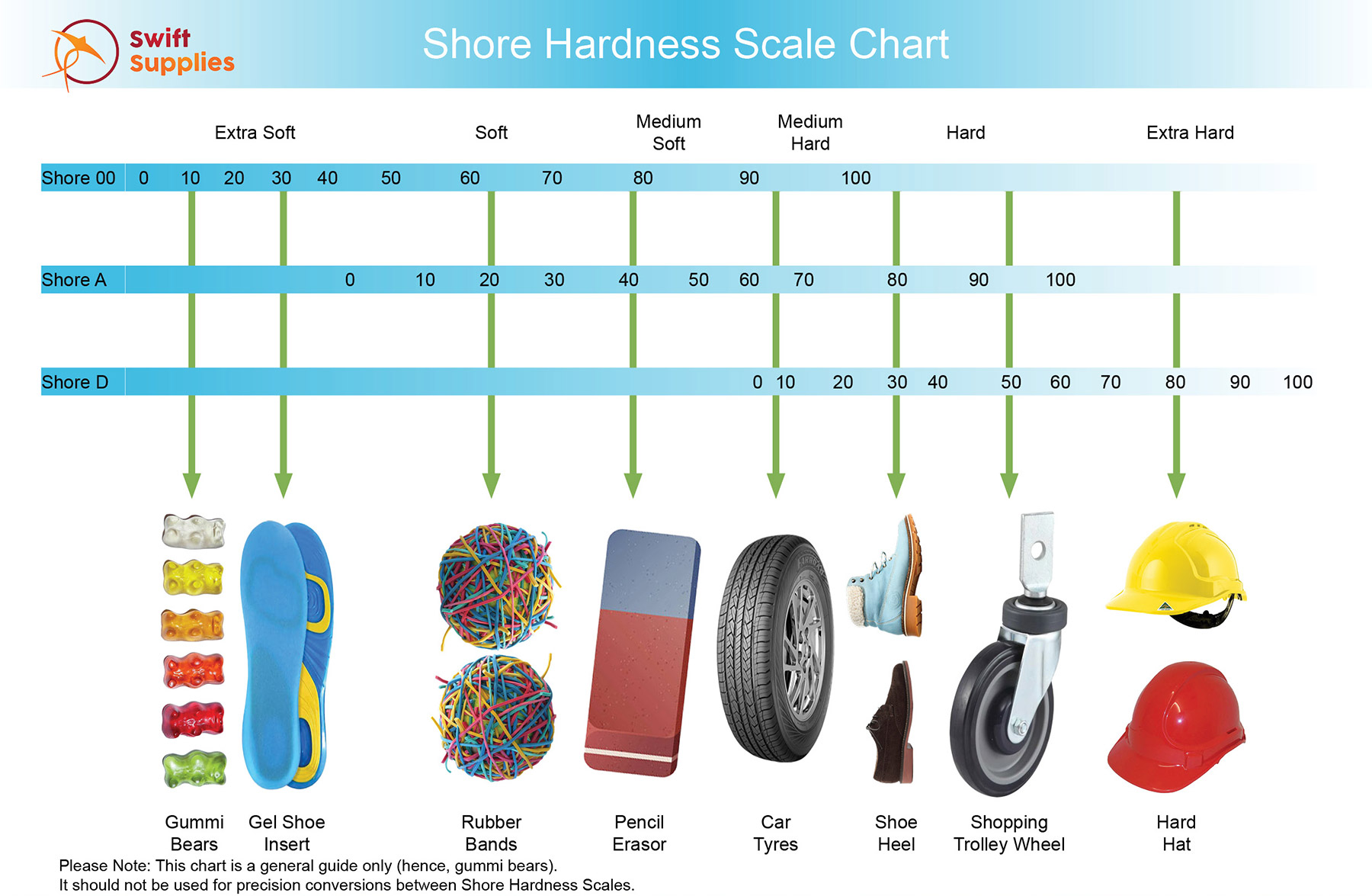